Part 1 - Why is Feminism a Dirty Word? - Bramwith Consulting

I went out to dinner with some good friends a few weeks ago. We were discussing the different challenges of work and childcare and one of them said: “But you’re a feminist, Saffa, so you’re less maternal.”

Later the same evening, another friend said that women are “too emotional” for the boardroom.

These two comments really got my back up. They also got me thinking about why feminism has such a bad rap, and about the double standards we still hold for men and women. It annoyed me enough to write two blogs about it!

In Part One, I want to look at why the term ‘ feminist’ is still so divisive, even among women, and why we still expect women to choose between high achievement and being there for your kids.

Despite having built a company from the ground up, I don’t describe myself as a feminist.

The OED definition of ‘feminism’ is simply: ‘the advocacy of women's rights on the ground of the equality of the sexes.’ I can get on board with that, but not with the way the term is used to berate women.

If you say men face issues too, or you want to stay at home with your kids, you’re a ‘bad feminist’. If you ‘ve made a successful career for yourself in a traditionally male industry you’re ‘one of those scary feminist types’.

I’m not alone in this. In 2016, research by the Fawcett Society found that while 67% of people supported equality for women, only 7% of people across the UK would actually describe themselves as feminists.

Even some of the world’s most formidable women don’t call themselves feminists. When an interviewer asked Angela Merkel if she would describe herself as a feminist, she replied: “I am not afraid of it [the label]. If you think that I am one - please, vote on it. But I don't want to adorn myself with these feathers.”

I don’t like taking on other people’s labels. I’ve succeeded on my own terms, and I also think actions speak louder than words. At Bramwith we have put equal opportunities at the core of the business, with parent-friendly flexible working and a meritocratic pay structure.

You might say these are feminist policies, in which case my husband is a feminist too. As well as being a Director. He is a Diversity & Inclusion champion and works just as hard as me to ensure a level playing field for all staff! Yet no-one is accusing him of being less paternal towards his kids just because he has a high-powered job.

I feel very strongly that running a successful company does not make me any less maternal than a stay-at-home-mum. I love my children and I make every second I spend with them count. So why am I seen as an unmaternal feminist, while my husband is a good dad for making the effort to do school pick-up several times a week?

It seems like the next generation are happier to embrace the idea of feminism, with a 2019 survey finding more than two thirds of women aged 18 – 24 and a third of young men (18 – 30) now describing themselves as feminist.

Maybe the tide is turning, and the negative associations of the word are fading away. Still, rather than picking a label for myself, I prefer to think about what actions I can take to promote equality. When my son and daughter grow up, I want them both to find themselves in equal partnerships. That could mean my daughter being one half of a power couple, or it could mean she is a stay-at-home mum.

Both those roles are equally important and I want her to have the freedom to choose, without being defined in someone else’s words. If I put in the work now to make that future achievable for her, I don’t care whether or not she calls herself a feminist.

What do you think – would you describe yourself as a feminist, or do you dislike the term? 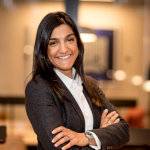